Coquet Trust provides support to you to help you live a full and fulfilling life in your own home.. The support we provide can range from a few hours per week up to 24 hours of support every day depending on your needs.

The accommodation you live in can be rented or you could own your own home living on your own or with others.

We aim for everyone in supported living to follow their aspirations develop their skills find work if they want to and be as self-supporting and independent as they can.

We have supported people to move into a supported living setting from the family home, hospital and residential care. 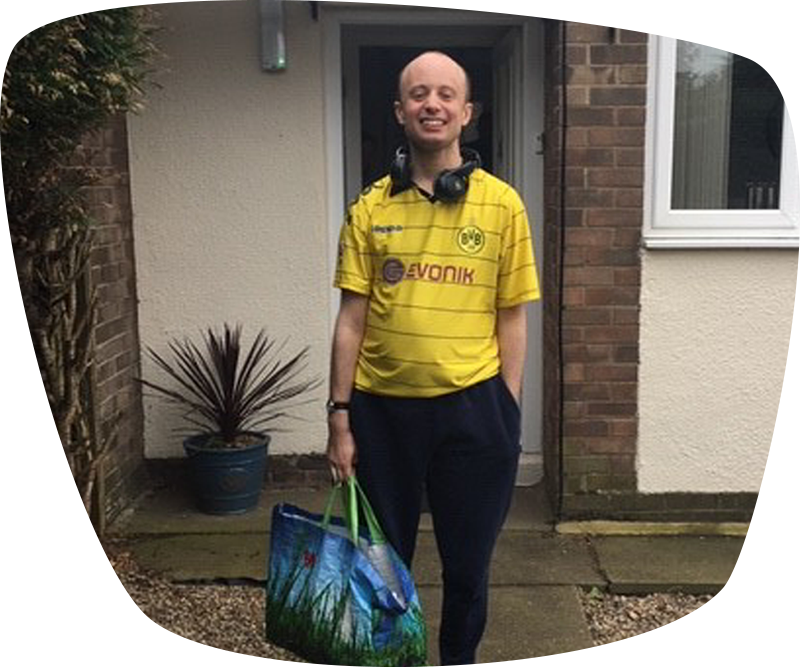 In January 2002, just after New Year, we received a call from a social worker asking us to support a young man with a learning disability. It was his 18th birthday in a few days’ time and he was being supported (in a bed and breakfast) by an organisation that could only support children.

Dan had a history of stealing cars and drug-taking. He was estranged from his family and had lived outside of the region for some time. Dan lacked confidence and at his weekly progress meetings he would not make eye contact with anyone, or participate in more than the odd grunt. His tolerance of the meetings was limited and he would often get angry or become bored and walk out of the room to smoke.

We spent several years working with his multi-disciplinary team and his mum and dad who were now engaging again with Dan to enable him to move forward in his life and explore more positive activities.

Fast forward to today. Dan lives independently in a flat. He has a job and supports himself without any input from paid staff. He has a car, a motorbike and a dog! He has friends and gets on well with his family. Occasionally, he drives over to Coquet Trust Head Office and pays us a visit – for old time’s sake!

He had this to say about how the support he received from Coquet Trust helped him to achieve independence:

“The staff helped me to build my confidence by taking me to do activities like jet-skiing, go-karting and rock climbing. ‘D’ helped me to pass my test and buy my first car. ‘L’ made a scrapbook with me to record all the things I wanted to do, like climb Kilimanjaro or drive a Formula 1 racing car. I never climbed Kilimanjaro, but I got to the second round of a competition to become a racing driver!

Later, when ‘J’ worked with me, he helped me to get through a two-year college course and I got a Level 2 Diploma in Motor Mechanics. Whenever I was stuck, he was there, and he would even let me ring him for advice when he wasn’t at work. If I couldn’t get hold of one of my staff, I used to go across to the Coquet Trust office to talk to someone. There was always someone to give me advice if I felt stressed or had a problem. I was never alone.

When I finished college, the staff helped me after I got a job on a farm. They made sure that I kept the job by talking through with me any problems I’d had during the day and talking to the farm manager when needed. They helped me to look for other jobs too and to become more and more independent.

Even though I haven’t had any support for nearly two years, I still keep in touch with ‘D’ regularly.”

We use cookies on our website to give you the most relevant experience by remembering your preferences and repeat visits. By clicking “Accept”, you consent to the use of ALL the cookies.
Cookie settingsACCEPT
Manage consent

This website uses cookies to improve your experience while you navigate through the website. Out of these, the cookies that are categorized as necessary are stored on your browser as they are essential for the working of basic functionalities of the website. We also use third-party cookies that help us analyze and understand how you use this website. These cookies will be stored in your browser only with your consent. You also have the option to opt-out of these cookies. But opting out of some of these cookies may affect your browsing experience.
Necessary Always Enabled

Any cookies that may not be particularly necessary for the website to function and is used specifically to collect user personal data via analytics, ads, other embedded contents are termed as non-necessary cookies. It is mandatory to procure user consent prior to running these cookies on your website.